Skip to content
To look at a Michael Andrew Law painting, is to experience a snapshot into the very bright and shinely eye of his subjects.

Each person portrayed in his work, which is smooth at the same time textured with oil paint, is telling a story about the life of the girl, the emotion of that moment in time, their life surrounding them, and a warm sense of the human condition and its uniqueness.
“People Love Storys” Michael Andrew Law says, “and I tells story better than anyone else.”

Born in 80s in the then British colonial era of Hong Kong, Michael Andrew Law grew up deeply immersed in the mixed culture of east and west and had a soft spot for two activities, films and drawings.

Upon graduation, he immediately began painting illustration for various industries including feature film posters and storybooks  and advertising.
Today, fine art dominates his career.
Describing his portraits as Contemporary Rock Realism, Michael Andrew Law sees his paintings as his portal into various cultures and different areas of society.
“I like the connection between images and stories,” he says. “The different emotions, gestures, moods, environments, and style of people in our life and those that we cross paths with, all become part of my storytelling. Even with my illustrated arts, I think it’s important to show who a person or character is and what is the most interesting part of their life that which is choices and what makes they made their choices. I really feed off the reaction of other people to my work. I want to tell all of my subjects’ stories . ”

Working in oil paint or sometimes acrylic and ink,Michael Andrew Law uses panel and sometimes mounted blank film preferring the option of layering paint to create a lot of texture, as he feels that the contrast of smooth surface and  uneven surface adds to the emotion of the story.
“My paintings are extreme in thickness and smoothness,” he says. “I love how experimental oil allows me to be. I can keep the colors moving until I like what they have done to the piece.”
My influences as a painter was Caravaggio , Rembrandt and Bouguereau ; you definately would some how see a bit YiFei Chen in me as well ,and I love his later works ,despite most of the critics doesn’t.

When there is no surfing, I will work 12-hour days, seven days a week. I am at a stage in my career where I can control my work load, keep my lifestyle intact, and hang out with my wife and kids.” 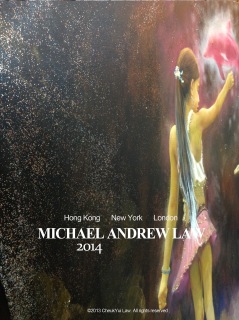 Outside of the studio , he enjoys screenwriting, and working couple of independent film project. “I love to tells story , and film making is a lot of ways a different canvas for that.”

“I prefer the brighter side of a story telling and image making because it is more interesting than just a milk-toast style.
This is how I approach my art . 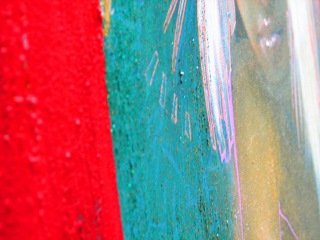 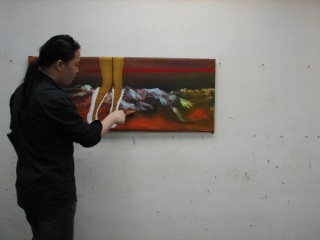 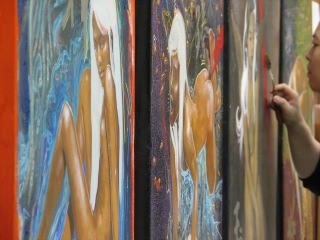 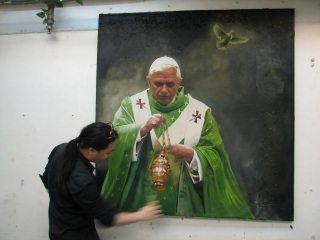 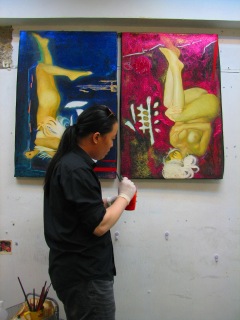